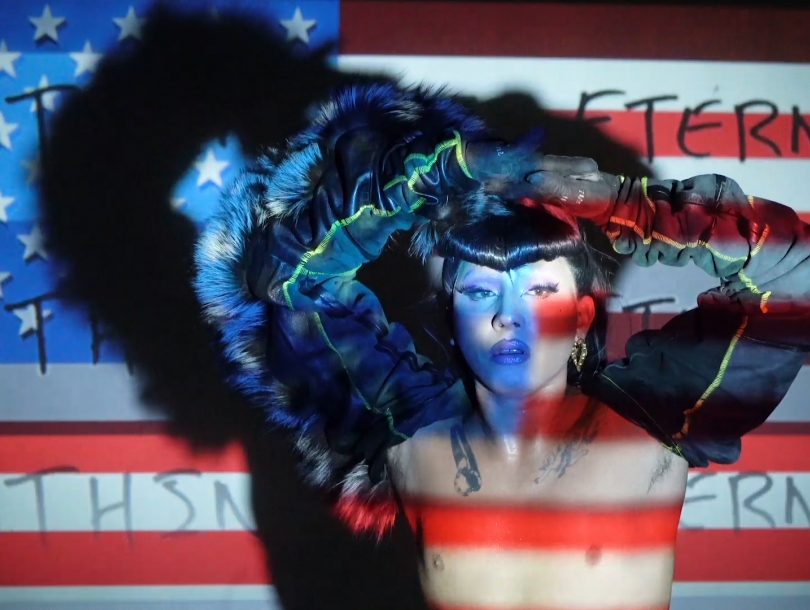 Jeffrey Gibson
Nothing is Eternal

Jeffrey Gibson presents Nothing is Eternal, a newly commissioned video with musical composition commissioned by the Wattis Institute. Conceived during this pandemic era, the immersive video work depicts the American flag in unsettling stillness, as a marker of territory, and projected onto bodies, while set to a heartrending soundtrack. At once melancholic and beautiful, Gibson renders the iconic image of the flag as both elastic and unyielding. The slow transformation through time, color, and form reflects both a distillation of our social collapse and the reinvention of self and community, referencing the movement and change that is so desired for this nation. 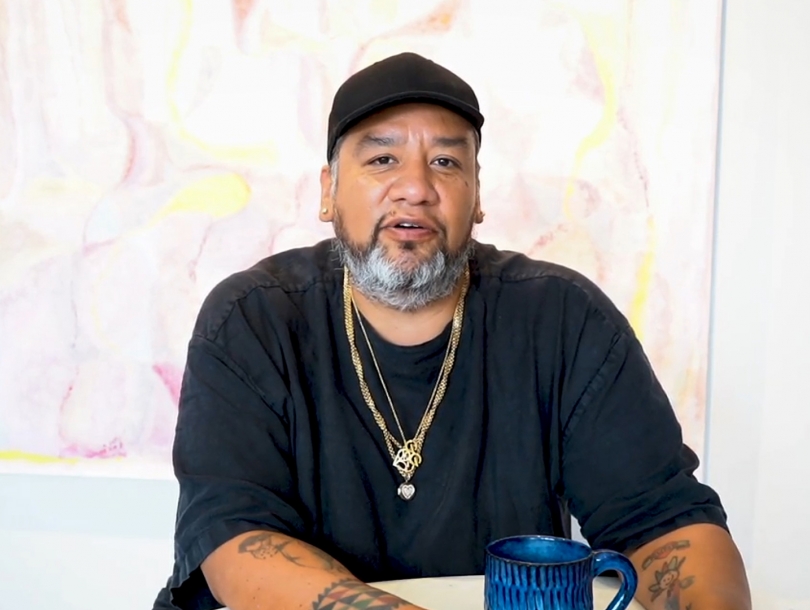 Jeffrey Gibson speaks about his ceramic works featured in Every Eye Open, as part of Roberts Projects participation in Gallery Platform LA, August, 2020. Gibson fashions his ceramics in the style of early Mississippian culture ceramic “head pots,” paying due to the complexities of American history by accessing a less prominent ceramics tradition. 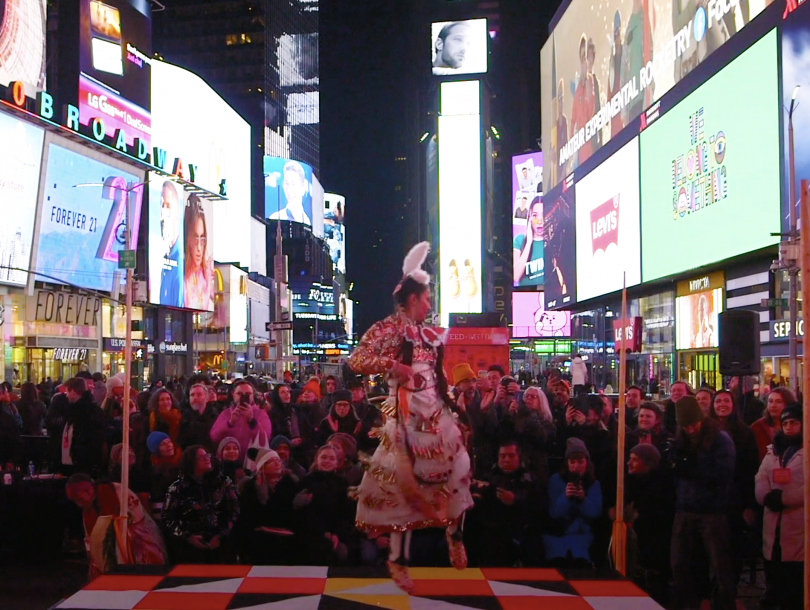 A multi-channel video created specifically for the screens of Times Square, She Never Dances Alone (2019) is Jeffrey Gibson’s celebration of the Indigenous matriarchy, centering on the jingle dress dance, a powwow dance that originated with the Ojibewea tribe and is traditionally performed by women to call upon ancestors for strength, healing, and protection. This Midnight Moment is presented with the Brooklyn Museum on the occasion of Gibson’s exhibition When Fire Is Applied to a Stone It Cracks. 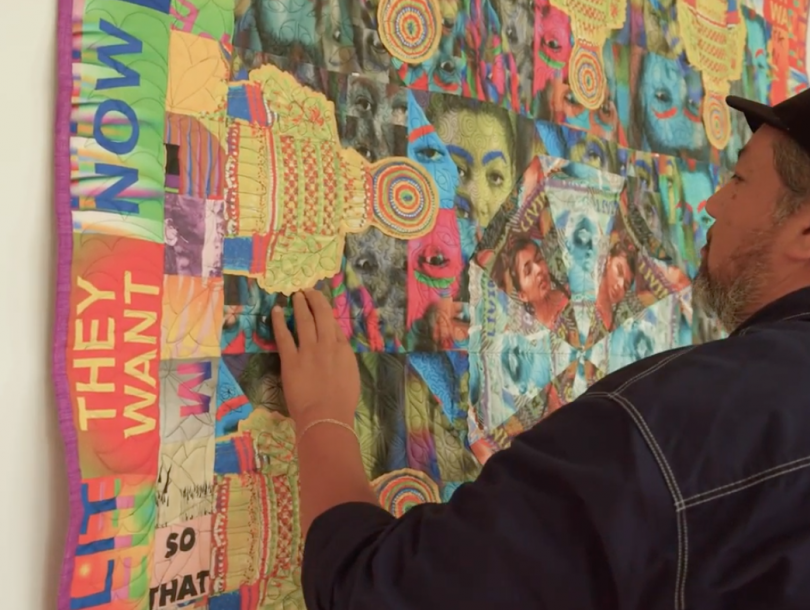 Jeffrey Gibson is a visual artist, melding indigenous North American materials and forms with those of Western contemporary art to create a new hybrid visual vocabulary and prompting a shift in how Native American art is perceived and historicized. 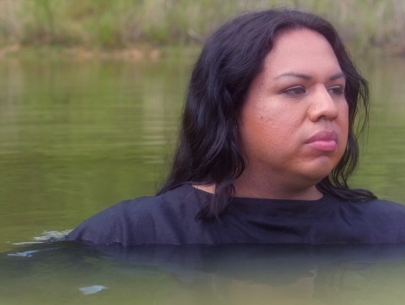 Jeffrey Gibson
I Was Here

Jeffrey Gibson's I Was Here (2018) mixes documentary and dramatic styles and centers on Macy, a transgender woman and a member of the Choctaw Nation. Blurring the lines between a mystical, natural setting and Macy's daily reality, Gibson's film examines the private and personal routines of transformation and self. The film's location, the Choctaw reservation in central Mississippi where Gibson's family is from, plays a significant role in the film's blend of spirituality, ritual, and the fantastical. The film was commissioned by the Ruth and Elmer Wellin Museum of Art at Hamilton College for Gibson's 2018 exhibition This Is the Day. 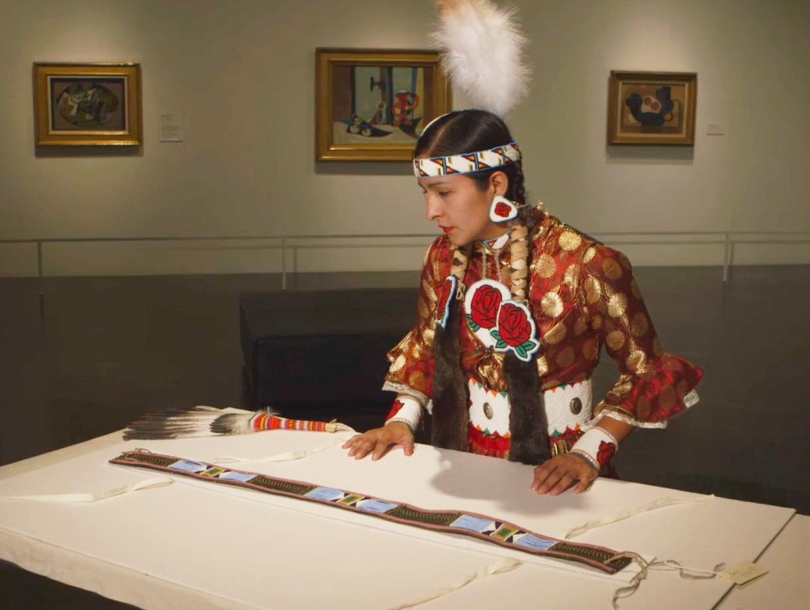 Jeffrey Gibson
One Becomes the Other

Jeffrey Gibson's "One Becomes the Other” (2014–2018) is set in the Native American archives and art storage of the Denver Art Museum. We see a man speaking Kiowa pick up a hand drum from a shelf and begin to play. A woman in a long, white dress with colorful patterns enters the halls, dancing in time. There is an improvised moment where an art handler asks to participate in the filming. He opens a drawer, and finds a Navajo weaving comb like his grandmother’s. He talks to the comb as if it is his deceased grandmother, bringing himself to tears. The sleeping objects are understood as living. 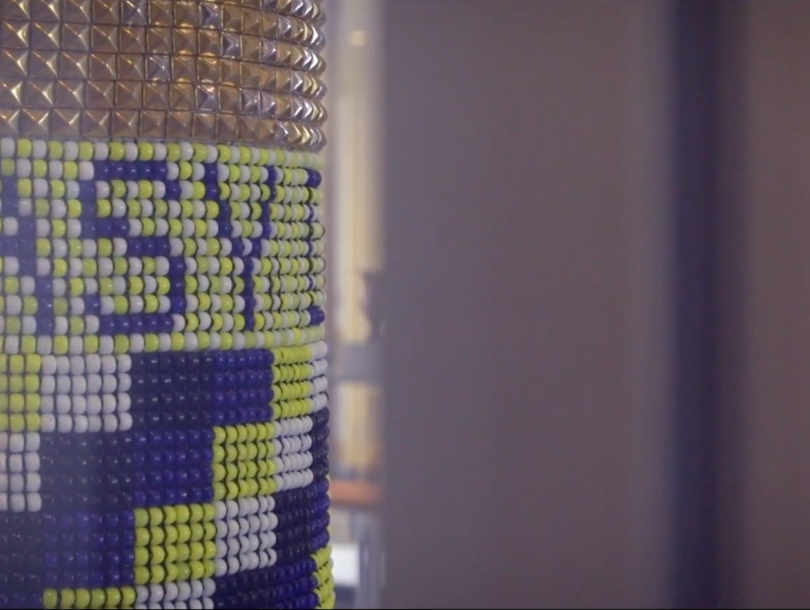 Jeffrey Gibson
This Is the Day

Jeffrey Gibson: This Is the Day Curated by Johnson-Pote Director Tracy L. Adler Videoography by Brett Novak Jeffrey Gibson’s multidisciplinary practice encompasses a wide range of mediums and draws on a variety of influences and visual languages to comment on race, sexuality, religion, and gender, among other topical issues. Combining popular and queer culture with references to Native American history and current events, Gibson reflects on his Choctaw and Cherokee heritage as a means of exploring the significance, traditions, and rituals of personal adornment and identity.