The World Stage: Israel is the latest installment of Kehinde Wiley’s colossal The World Stage series. Through Wiley’s comprehensive exchange, the artist’s contemporary yet historical oeuvre accentuates international cultures and their denizens, evoking discourse on an ever-expanding examination of globalization. Kehinde Wiley, who traveled to Tel Aviv and Jerusalem, discusses his connection and engagement with the world through The World Stage series: After a while...I started to see certain patterns emerge, patterns such as ways of dressing, patterns of speech, a type of post-black urban sensibility that supersedes race, that supersedes tribal group. It is, in many ways, something to do with class affiliation. The positioning of Israel within The World Stage series is crucial and key in understanding the project given that each country is selected for its unique political and social importance in the world arena in the year 2011. The work included in The World Stage: Israel specifically concentrates on contemporary Israeli youth culture utilizing discotheques, malls, bars, and sporting venues as locations to scout participants. All of the models come from a full range of ethnic and social backgrounds. In addition, the work relies heavily upon a desire to see the decorative traditions that have come out of Israel, historically juxtaposed with some of the more contemporary modes of national and personal expression. 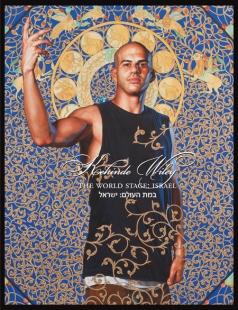 The fact that Kehinde Wiley maintains studios in three far-flung cities (New York, Beijing and Dakar, Senegal) attests to his success as a painter, which is regularly described as “meteoric.” It also reflects his working method, which involves painting portraits of people from around the world, with some serious help on the background designs from assistants.

Does contemporary artist Kehinde Wiley really need another article written about him?  There've been so many, too many to keep track of.  Perhaps he is the most written about artist of his time, thanks to crossover appeal into the worlds of hip hop, bourgeois art, sport, and celebrity.