Throughout his career spanning close to four decades, Daniel Joseph Martinez has engaged in an interrogation of social, political, and cultural mores through artworks that have been described as nonlinear, asymmetrical, multidimensional propositions. Operating with fluidity and as open source manifestations not bound by any singular category, his works extend from the ephemeral to the solid. Martinez’s practice takes the form of text, sculpture, photography, painting, installation, robotics, performance, and public interventions to unapologetically question issues of personal and collective identity, vision and visuality, and the fissures formed between the appearance and the perception of difference. Ongoing themes include contamination, history, surveillance, violence, nomadic power, cultural resistance, war, dissentience, and systems of symbolic exchange, directed toward the precondition of politics coexisting as radical beauty. Their commonality is that they all address topics of race, class and sociopolitical boundaries present within American society.

Daniel Joseph Martinez
Leipzigerstraße at the Federal Ministry of Finance. What’s remarkable about this building and yet widely unknown is that on October 7th 1949 the GDR (DDR) was founded/constituted here. The mosaic by Max Linger is called “The buildup of a republic” (German: Aufbau der Republik) and is entirely made out of Germany’s well known Meißner porcelain., 2017
Medium format black & white film printed digitally on Hahnemule Fine Art Baryta, Gloss 315gsm
60 x 72 in (152.4 x 182.88 cm) / 61 x 75.5 x 2.5 in (154.94 x 191.77 x 6.35 cm) framed
Collection of the Hammer Museum, Los Angeles, California

Daniel Joseph Martinez
Blessed Accessories (from the series Field notes from South Los Angeles; this world is a fleshless one where madness, love and heretics are all I know), 2013
Pigment print on Canson Infinity Baryata
13.43 x 24 in (34.11 x 60.96 cm)
Edition of 10 (2AP)
Collection of the Los Angeles County Museum of Art, Los Angeles, CA 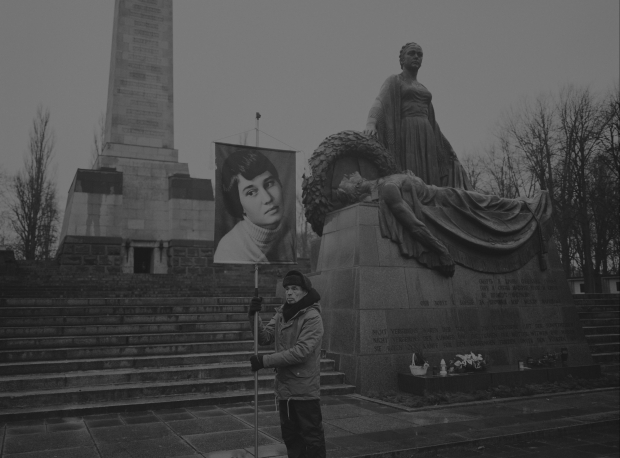 Daniel Joseph Martinez
I am Ulrike Meinhof or (someone once told me time is a flat circle) October 28 – December 16, 2017 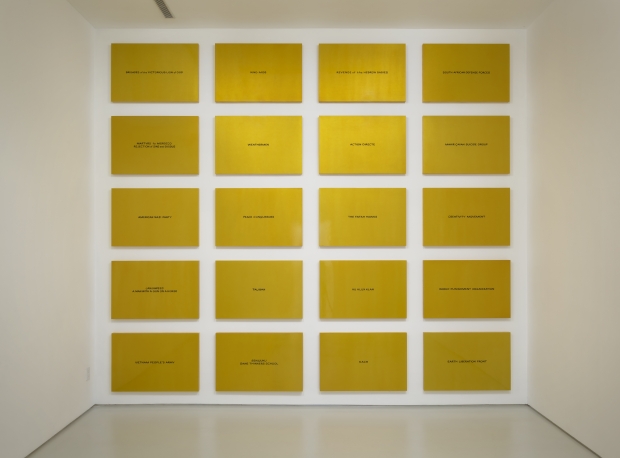 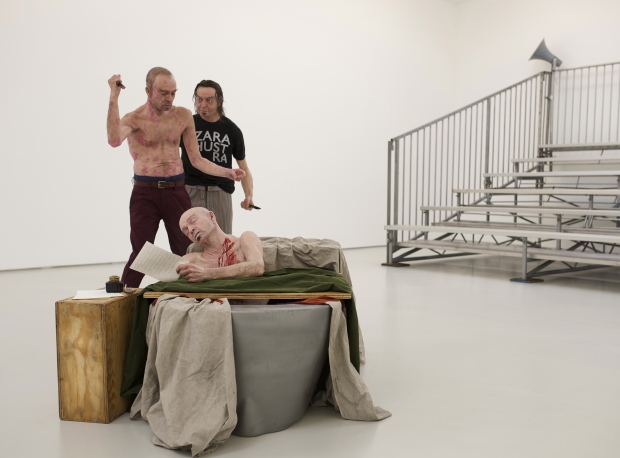 Daniel Joseph Martinez
IF YOU DRINK HEMLOCK, I SHALL DRINK IT WITH YOU or A BEAUTIFUL DEATH; player to player, pimp to pimp. (As performed by the inmates of the Asylum of Charenton under the direction of the Marquis de Sade) April 9 – May 21, 2016 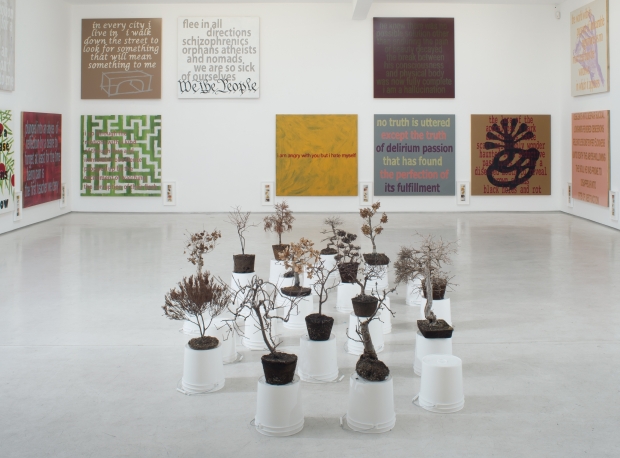 Daniel Joseph Martinez
The Report of My Death Is an Exaggeration; Memoirs: Of Becoming Narrenschiff January 11 – March 8, 2014 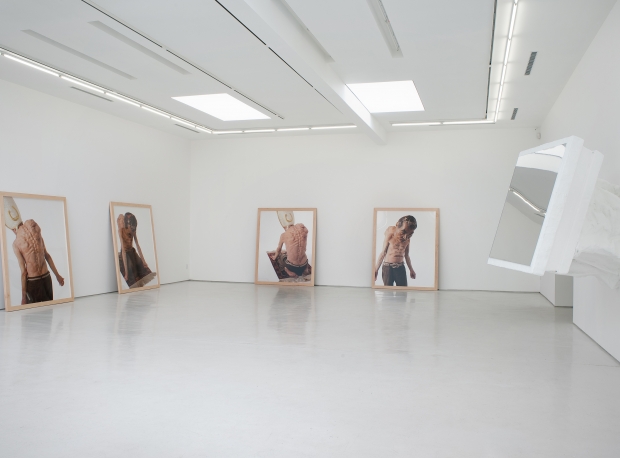 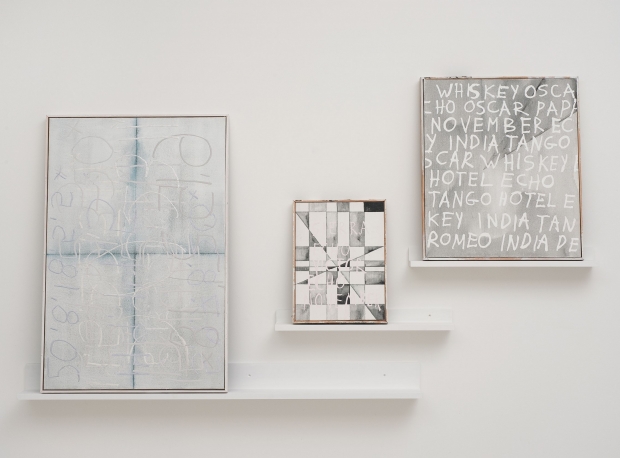 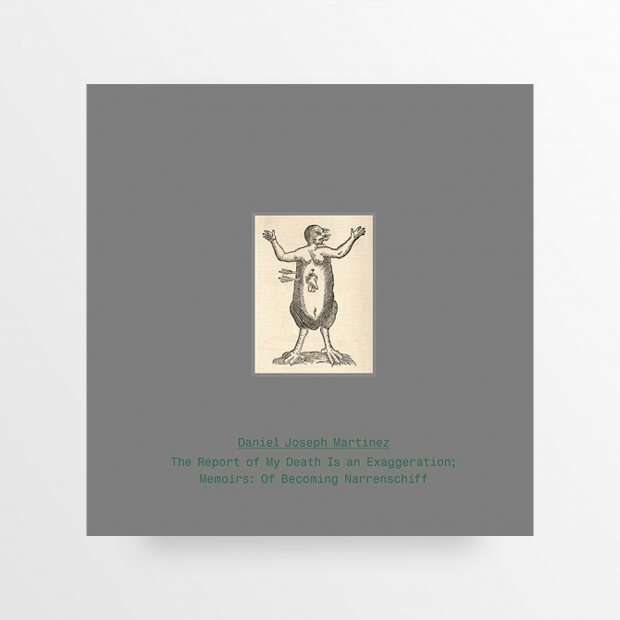 Walk into Roberts & Tilton gallery in Culver City and you will stumble into a murder scene. A man lies dead in a bathtub. His wild-eyed assailant stands behind him, knife in hand, ready to strike again in case the deed is not done. Another figure reaches toward the murderer, futilely trying to put a stop to the death that has just transpired.

The ghastly scene is a sculptural installation by Los Angeles artist Daniel Joseph Martinez that riffs on one of the most famous paintings in Western history: Jacques-Louis David’s late 18th century masterpiece “The Death of Marat,” which depicts the bloody assassination of the French revolutionary thinker Jean-Paul Marat in his bathtub.

In a whirlwind of an exhibition at Roberts & Tilton, Daniel Joseph Martinez confirms his reputation as a brilliant mad philosopher. Inspired by the medieval “ship of fools,” in which the mentally ill were housed on wandering vessels, Martinez performed his own ritual unmooring, obsessively riding the buses of L.A. to observe the passengers.

The result is a roomful of paintings in the style of the city’s colorful, vernacular signage, inscribed with Martinez’s observations and declarations. These are interspersed with collages of small, intimate Polaroids. They’re billed as self-portraits but are actually ambiguous close-ups of what could be body parts or excrement or perhaps decaying food. In the center of this maelstrom is a flotilla of uprooted bonsai trees, symbols of death, certainly, but also the remains of lives subjected to extremes of confinement and control. In an adjacent room are companion photographs of storefronts on which Martinez wrote his thoughts as graffiti.

Few artists working in Los Angeles today have been as consistently adamant in their politics as Daniel Joseph Martinez. From his famous contribution to the 1993 Whitney Biennial, “I can’t imagine ever wanting to be white” — a work whose edge has yet to dull in 20 years of near-constant citation — to his recent trek along the 800-mile length of the Trans-Alaska Pipeline, Martinez’s work is scored with outrage and the particular brand of analytical fascination that outrage tends to engender.

Less often discussed, though equally significant, is the curious nature of the artist’s poetics: how elusive and strange his sculptures, photographs and text works can be, how beautiful and sad, particularly in recent years.

Daniel Joseph Martinez has a question, or, rather, he wants you to have one. Well-known as one of the art world’s favorite provocateurs, the Los Angeles native and resident has brought his unique brand of art-as-conversation-piece to Culver City’s Roberts & Tilton Gallery for his first L.A. gallery exhibition in a decade, “I Am a Verb.” But why is Martinez, a non-Jewish artist, getting coverage in the Jewish Journal?  Well that’s simple, really; one of the works he made for the show is a series of photos of a hunchbacked, masked man with the Shema tattooed on his chest, along with a Muslim prayer inscribed in Arabic on one arm and a Catholic prayer in Latin on the other.