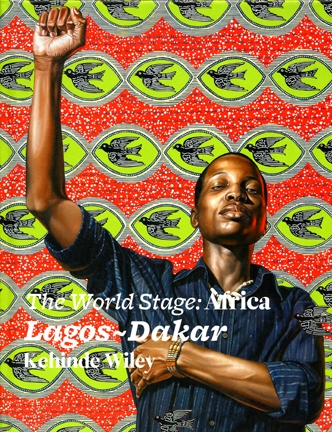 Kehinde Wiley: The World Stage: Africa, Lagos ~ Dakar was Kehinde Wiley’s (b. 1977) first solo exhibition at The Studio Museum in Harlem and featured ten new paintings from his multinational The World Stage series. Wiley is known for his stylized paintings of young, urban African-American men in poses borrowed from eighteenth- and nineteenth-century European figurative paintings, a practice he started in the early 2000s while an artist in residence at the Studio Museum. Over the last two years, Wiley has expanded his project by living and working abroad; he temporarily relocates to different countries and opens satellite studios to become familiar with local culture, history and art. His World Stage series is the result of these travels.

Wiley’s first trip was to China, where he placed his models in poses based on Chinese propaganda art from the Cultural Revolution. The World Stage: Africa, Lagos ~ Dakar, organized by Christine Y. Kim, featured paintings from Wiley’s next stops, Senegal and Nigeria. For this exhibition, Wiley’s models mimicked historical public sculptures from Dakar, Senegal, and Lagos, Nigeria.