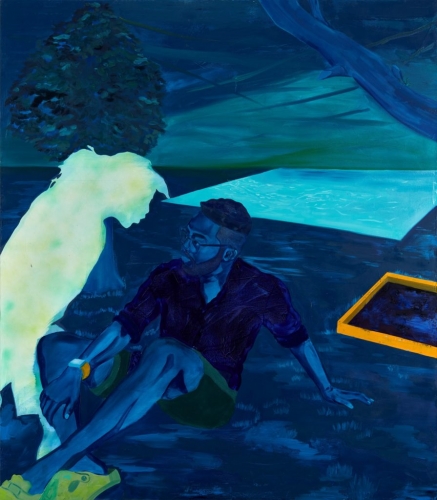 2020 is not a year like other years. May, usually a marquee month of auctions and art fairs, is now but a mere whisper of its former self. But that’s not to say it’s without charms, as young artists around the world continue to make and debut new works in galleries that are both opened and closed to the public.

And so, though you might not be able to make the usual circuit of galleries, you can certainly still discover up-and-coming talents. This month we’re highlighting five emerging artists whose practices you might not know, but should—and whose most recent work can be experienced online through the Artnet Gallery Network.

Dominic Chambers’s paintings often have a mythological or quasi-religious feel, with contemporary figures enraptured by supernatural experiences. In this lush group show, Chambers presents one hypnotic canvas in shades of blues and greens, and which captures much of show’s magic. In the image, a seated young man, in what appears to be a smartwatch and a pair of crocs, reclines in an otherworldly midnight landscape, as the glowing, ghostly silhouette of a figure leans over him—but the figure seems either unafraid or unaware of its presence.