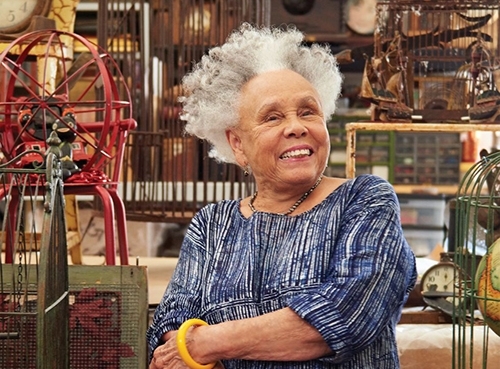 Few artists have had careers as storied as Betye Saar’s. Her recently opened exhibition, Betye Saar: Call and Response, on view through January 31 at the Morgan Library and Museum, makes that abundantly clear. Saar’s work consistently challenges flattened representations of Blackness, instead articulating an artistic code informed by Saar’s maternal lineage, spiritual symbolisms, and cultural motifs that span the African diaspora.

Born and raised in Los Angeles, the 94-year-old Saar is on the roster of Black artists who have shaped American arts and letters. She trained as a printmaker in the 1950s, by which point she was already an artist and a mother of two. She was also working as a social worker and was in school pursuing a teaching certificate and fine arts degree. Black artists in the postwar era were required to negotiate a terrain that was exclusionary and racist at worst, paternalistic at best. For Black women who were also mothers and caretakers, that negotiation was even more complicated. Yet, as scholar Kellie Jones has noted, Saar understood that her roles as artist and mother were integrally related. “Like Faith Ringgold in New York, Saar stressed the importance of motherhood and did not retreat from that gendered role,” Jones says. “Rather, she sought to make a better place for the next generation, for her own daughters.”

Saar’s daughters—Lezley, Alison, and Tracye—dynamic artists and writers in their own right, have long served as muses for Saar. Girl Children (1964), for example, is an etching in which Saar’s daughters are each captured in girlhood. As Saar tells me, there is a beautiful connection between her role as a mother and as an artist. “They’re both about creation… Overall, I approach motherhood as I do art.”