Ai Yamaguchi's exhibition consists of a large-scale mural installation depicting the fictitious world of Touge no Chaya, the Teahouse of the Mountain Pass, set in Japan’s Edo period (1600-1868 AD). It is here that Yamaguchi’s characters, nine young girls between the ages of nine and ten, live and work as courtesans. Unlike Yamaguchi’s previous work which focuses primarily on the girls’ turbulent emotions and naiveté, Sukutoko concentrates on a unique ritual performed by the girls for purification and release from the burdens of daily life. During Sukutoko, the girls place incense left behind by their lovers inside clam shells and imagine various spirits in the rising smoke. Through this act of incense-offering the girls experience a sense of delight, and are able to escape the demands of life at the brothel, if only for a moment.Originally trained in textile design, Yamaguchi’s work combines the refined aesthetics inherent in classical Japanese culture with the pop-culture sensibilities of contemporary Japanese animation. Her use of unique materials, attention to detail, and engaging narrative help transport the viewer into a world filled with lush patterns and rich history. 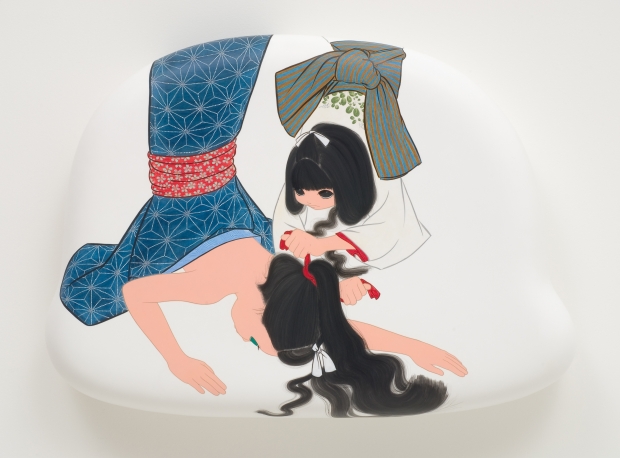